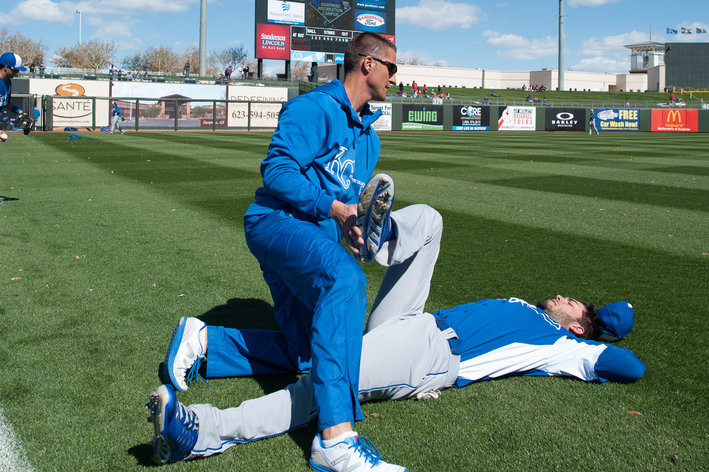 Written by Jon Rousseau on March 7, 2014. Posted in Media Coverage

A few days ago, I was able to interview Keith Hatfield, a former Royals trainer, on his time with the Royals and is latest invention, the Hatfield Strap.

What years and which affiliates were you a Royals trainer?

How receptive were the players to the required pregame stretching?

We had a regular routine that they had to go through outlined by the major league athletic trainers and the team physician. That same list was passed down to all the minor league levels. It was an important thing they had to do and they understood its importance.

Why are more and more players going on the disabled list today compared to the past?

Players are always striving to improve their performance and get ahead of other people. They are working out more and more and more. It used to be in the off season players used to just lounge around and get out of shape. Now-a-days, they work out and have to come into spring training in shape. More is expected of them all the time. They constantly have to push it and push it and push it.

Who made the call to rest a player, the local team or the organization?

There were things that came from management. The challenge of an athletic trainer in minor league baseball is management wants to keep a player healthy. It is their investment for the future. The coaches also want to keep the players healthy, but they also want to get them developed with some playing time.

So when management wanted me to not bring a player back in until the players were 100% and then the coaches were like, “I have played 15 years in professional baseball and I was never 100%.” That was the challenge. I was very much aware, being a former athlete myself, when you are participating in a sport, you are never that 100% tip top shape all the time. There is always something that happens here and there that makes you not 100%. Whether you fall down and bruise or hit something or you pull a muscle, you have to keep performing. Our job, was to keep the players as healthy as we could so they could perform with an understanding they were never going to be 100%.

Which players did you like to work with as a trainer?

The greatest player to work with during my time as an athletic trainer was Mike Sweeney. That guy would do anything for you. Great attitude and he always worked hard.
Did you ever see or suspect a player was using PEDs while you were with the team?

Not at all. I didn’t see it with any of the players. We did have a player taking a protein supplement one time. On the physical, his liver enzymes were up. We told the player, “We don’t know what you are taking, but this is not doing your liver any good.” He stopped taking it then.

Obviously some players were doing it during that time. When some players gains 40 lbs of muscle in less than one year, they are doing something. I never saw it with my players. They were just trying hard to make the team and not get cut.

After you left the Royals, why did you created the Hatfield Strap?

There are all kinds of straps on the market, this one is for the foot, the calf, and the hamstring. It allows you to flatten out your foot and stretch it as if you were standing on it, but without putting your body weight on it. It is also a great hamstring stretch as if another person is doing the stretch for you.

Trackback from your site.

Inventor of the Hatfield Strap, and CEO of CK Industries of the Big Bend.